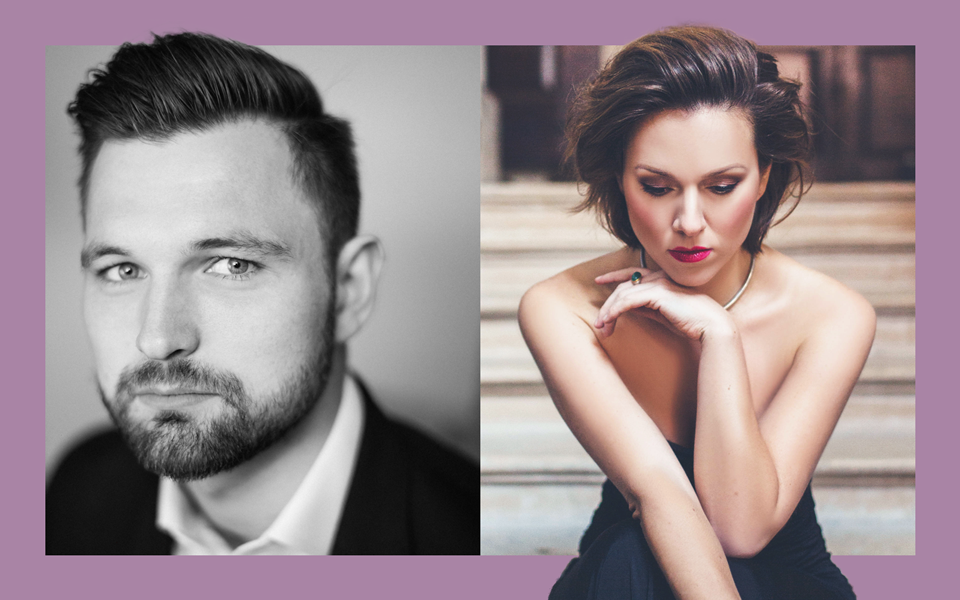 Baritone James Newby and soprano Mary Bevan each perform one of Schumann’s great Lieder cycles, and come together for selected duets, with Leeds Lieder director Joseph Middleton on piano.

Gramophone enthused of James Newby’s recent release with Middleton: “he shows he’s able to create vividly dramatic worlds… internalised emotion occasionally bursting into frustration and tangible anguish, with the singer unafraid of unleashing almost operatic intensity”. Reunited with the pianist, he brings all these qualities to bear on Dichterliebe, Schumann’s settings from Heine filled with visionary evocations of nature heightened by intense romantic yearning.

On Mary Bevan’s latest recording with Joseph Middleton, The Observer hailed ‘a singer with real dramatic power… each song is a story, feelingly told’. She rejoins him here for Frauenliebe und -leben (‘A Woman’s Love and Life’), Schumann’s setting of eight poems by that resonated deeply with the composer’s troubled experience of courting of his wife-to-be, Clara.

In association with Leeds Lieder

British baritone James Newby is currently a BBC New Generation Artist (2018-2021), an Ensemble member of Staatsoper Hannover (2019-2022) and a former Rising Star for Orchestra of the Age of Enlightenment’s scheme (2017-2019). He is a recipient of multiple awards including the 2016 Kathleen Ferrier Award, the Wigmore Hall/Independent Opera Voice Fellowship (2016), the Richard Tauber Prize (for best interpretation of a Schubert Lied) and overall Third Prize at the Wigmore Hall/Kohn International Song Competition (2015), the Trinity Gold Medal (2017) and Glyndebourne’s prestigious John Christie Award (2017).

Praised by Opera for her “dramatic wit and vocal control”, British soprano Mary Bevan is internationally renowned in baroque, classical and contemporary repertoire, and appears regularly with leading conductors, orchestras and ensembles around the world. She is a winner of the Royal Philharmonic Society’s Young Artist award and UK Critics’ Circle Award for Exceptional Young Talent in music and was awarded a MBE in the Queen’s birthday honours list in 2019.

Pianist Joseph Middleton specializes in the art of song accompaniment and chamber music and has been highly acclaimed in this field. Described in Opera Magazine as ‘the rightful heir to legendary accompanist Gerald Moore’, by BBC Music Magazine as ‘one of the brightest stars in the world of song and Lieder’, he has also been labelled ‘the cream of the new generation’ by The Times. He is Director of Leeds Lieder, Musician in Residence at Pembroke College, Cambridge and a Fellow of his alma mater, the Royal Academy of Music, where he is a Professor. He was the first accompanist to win the Royal Philharmonic Society’s Young Artist Award.